To it's owners, Southwest Airlines, it is N280WN, manufacturers serial number 32533, a Boeing 737-7H4, delivered on June 22, 2007.  However, to spotters all over the US, it is one of the special schemes that all aviation photographers chase.    That hasn't always been the case though.  When it was delivered, it worse the standard Southwest Canyon Blue color scheme.  Six years later though, it received it's first special scheme, and with the partnership between Southwest and SeaWorld, it became Penguin One.  This is the first time I managed to catch it in my camera lens. 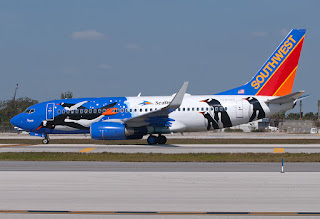 However, with the dissolution of the partnership between Southwest and SeaWorld, all the special schemes like Penguin One, Shamu, etc. needed to be be repainted and so in April 2015, Penguin One, gave way to the latest in the state special schemes, and became Missouri One.  And, recently, I managed to catch that in my camera lens too! 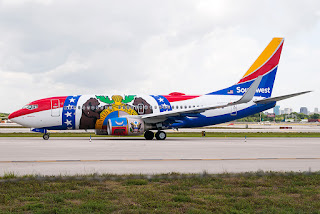 And, so some more time spent behind the camera lens, searching for the elusive special schemes.

Posted by Mark Lawrence at 7:27 PM No comments: