I was recently privileged to witness the first revenue flight of the first Southwest Boeing 737-800 - N8301J - "Warrior One". This wasn't the first time that I had seen her approaching Fort Lauderdale - a week previously, she had been doing proving and training flights to the fiver airports that were the first operational airports for the -800. One week later, and this time with the wind blowing from the west, Southwest 1717 from Chicago Midway approached runway 27R. 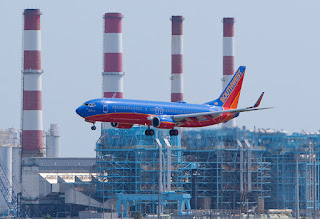 The approach took Warrior One past the towers of the refinery - a normal sight for pictures at Fort Lauderdale with approaches from the east. 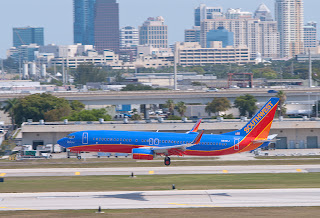 Warrior One over the runway - with the city of Fort Lauderdale in the background. 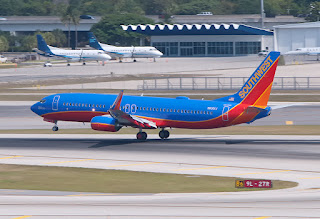 About to settle on runway 27R. 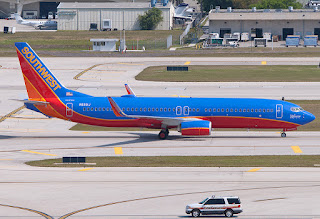 Taxiing back past the terminals towards the Southwest ramp. 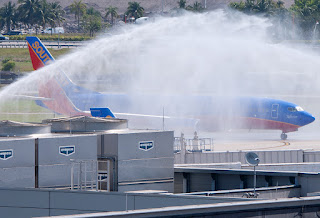 A water cannon salute welcomes Warrior One as she enters the Southwest ramp. Originally, the fire trucks were parked on either side of the B6 entry to the ramp, which would have given a perfect water cannon head-on shot, but - they moved down to the entry to the ramp before she arrived.
The very next day, the second -800 N8302F made her appearance and the two now operate on alternate days into Fort Lauderdale - soon - we'll have to keep an eye out for newer aircraft with the delivery schedule for Southwest being rather aggressive for 2012 and 2013. Although it's been a long time since I last posted, there have been a lot of time spent behind the camera lens (and new lenses too! :) )
Posted by Mark Lawrence at 7:03 PM 3 comments: